How many of you out there love gelato? How about watermelon gelato? It is the perfect summer dessert to cool you off after a hot day and so refreshing!

The only time consuming part of this gelato is the cooling down of the custard and freezing of the gelato. Nevertheless, the prep process is simple and your end result is amazing. So the next time the kids ask for a cheap Walmart freezer pop, scoop them out some of this and I promise they won't want anything else!

My first love affair of gelato started from Divino Gelato in Brookfield Square mall. I have tried several flavors and fell in love with most of them. However, my current favorite one is the cherry. It is so creamy and flavorful and definitely less fat than good old Ben and Jerry's.

I have never made gelato, but was excited to try a different flavor. Always thinking out of the box is my motto and making different desserts is fun and exciting. So do yourself a huge favor and make this watermelon gelato.

Gelato is a frozen dessert of Italian descent. It is made with a base of milk and sugar and is lower in fat than other frozen desserts. Density is creamier than other desserts and more flavoring due to 70% less air.

Gelato comes in many different flavors such as chocolate, vanilla, pistachio, and several fruity ones. However, more modern ones such as my watermelon ones are coming to the forefront!

These simple steps below will give you the best watermelon gelato on this planet! And all without an ice cream maker!

1. Pour milk into a large saucepan and heat over medium-low heat until it comes to a simmer. Puree thawed out watermelon.

2. While the milk is heating up, whisk together the egg yolks and 1 cup of granulated sugar until smooth. Temper your egg mixture by adding about ¼ cup of the hot milk to the mixture while whisking. Then, pour the warm mixture back into the saucepan.

3. On low heat, cook the custard for about 5-7 minutes or until it has thickened slightly and coats the back of a wooden spoon. Don't bring mixture to a boil as it will curdle.

4. Pour the custard through a sieve into a bowl and let it cool to room temperature (stir often, about every 5 minutes). Once it has cooled completely, cover with plastic wrap and put in the fridge for a minimum of 4 hours or overnight.

5. Once the custard base is cold, mix heavy cream until stiff peaks form. Gently fold in the whipped cream into the custard mixture.

6. Stir together the watermelon puree and 1 tablespoon of granulated sugar, until the sugar has dissolved.

7. Pour gelato into a loaf pan and place in the freezer. Go in about every 45-60 minutes and mix to break up ice crystals. Do this between 2-3x until it has thickened up.

8. Once the gelato has thickened, let it freeze for another 4-5 hours or until it is frozen before scooping. Cover and freeze for up to 6-8 weeks. 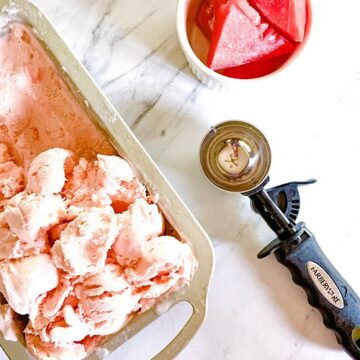 There is a Starbucks in Myungdong, South Korea that is 5 stories tall! I am a Starbucks junkie and I would be in my heaven here!