It's Chews Day (in my best British accent), and the best time to make Tunnocks Tea Cakes. I really do love the UK accent and have always wanted to take a stab at making one of their snack time desserts.

It seems as of late, I have been experimenting with desserts from different cultures, and am super duper excited when they turn out perfect. Not to toot my own horn, but this one came out amazing!

Who can go wrong with a biscuit bottom, marshmallow filling, and a chocolate dome like shell covering it all? It truly is the perfect snack to compliment a cup of tea. In my case, it would have to be an iced coffee drink as I am not a huge tea fan.

Where did tea cakes originate from?

Tunnocks tea cakes originated in Scotland, which is a part of the United Kingdom. The Tunnocks (family owned business) opened a bakery in 1890 and over the years it grew as multiple family members made it famous.

Boyd Tunnock was given the task to develop a new product and that is when he came up with the Tea cake. It was first developed in 1956 and a star was born! It flew off the shelves!

What is Golden syrup?

It is thick, smooth golden syrup that is made from sugar cane that has a unique buttery scent and a light caramel flavor.

Our stores here in Wisconsin did not have any golden syrup on the shelves, so I made mine from scratch. See video on how to make it!

First, whisk together the flour, baking powder, granulated sugar in a bowl. Rub in the butter with fingertips and add in the milk. Just add enough milk to be able to bring the dough together in a ball.

Second, knead the dough until smooth. Roll out until it is about ⅛ inch thick. Cut circles with a 3 inch cookie cutter. Transfer to a baking sheet and put in the fridge for 15 minutes.

Lastly, bake for 15 minutes until the biscuits are a light golden brown color around the edges. Allow to cool and set aside.

First, using a double boiler, place ⅔ of the chocolate in bowl and stir until completely melted. Check temperature with candy thermometer and don't let it go about 115 F.

Second, remove from heat and let the chocolate cool between 95 to 100 F. Only stirring occasionally. Gradually mix in the rest of the chocolate and stir until it is fully melted.

Third, remove from heat. Let it cool until it has thickened. Line a 5 cavity half dome silicon mold with chocolate. Spoon it into each cavity and spread evenly with back of spoon. Set aside once all full to allow the chocolate to set.

Lastly, coat the biscuits with chocolate and line them on parchment paper. Set aside.

First, add all the ingredients to a double boiler. Heat the filling until all of the sugar has dissolved and the mixture is frothy. This can take up to 10 minutes.

Second, remove from the heat. With an electric mixer fitted with a whisk, mix until stiff peaks form.

Fourth, reheat the chocolate over the double boiler again and then remove from heat. Add in the last remaining chocolate  and mix until melted.

Lastly, spread the chocolate on top of the biscuits and spread out. Put in fridge to set. Carefully, release the teacakes from the molds. Trim bottoms if needed to make the cakes perfectly round.

Can you freeze a Tunnocks Tea cake?

Yes, you can. Individually wrap them and freeze. Thaw before serving.

Why can't you add jam to the center?

The center is a meringue marshmallow filling and jam will not set well in the center. 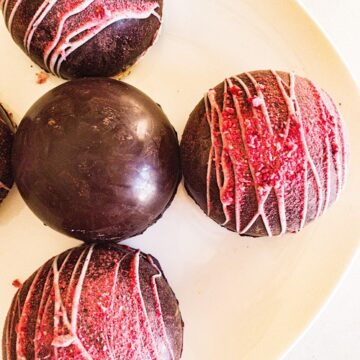 Many expensive perfumes contain whale poop. Ponder that one next time you want something from Prada!