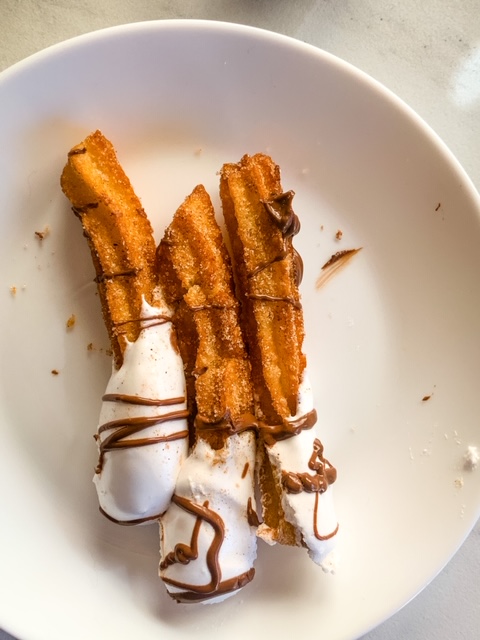 Well....I chose another hybrid this week! Schmurros or what I call the most ooey gooey churro smores recipe! Nonetheless, this will be the dessert added to any camping trip in the near future. A golden fried churro rolled in the classic cinnamon/sugar mixture, dipped in ooey gooey marshmallow, and then drizzled with Hershey's milk chocolate.

These little golden fried delights were distributed amongst friends at a neighborhood birthday party last night and were gone in two seconds flat! Thank God for that because I am a grazer and I would have most likely polished off several of these bad boys before bed!

What is a SMores Churro?

This little hybrid dessert came into the scene in 2017 in Disney land. It was first seen at the Critter country for the reopening of Fantasmic. They dip their churro in graham crackers and then serve it with a chocolate marshmallow sauce. It was then brought back to the parks in 2019.

However, many variations of this hybrid dessert have been made since the first launch of it. I have seen churro dough made into a sandwich, making it more like the traditional smores, and then some layering of the marshmallows and chocolate in between each churro. I chose to dip one end of my churro in marshmallow and the drizzle chocolate on top!

Any variation chosen will be delicious! This is one dessert that you just can't screw up!

Ingredients for the most Ooey gooey churro smores recipe 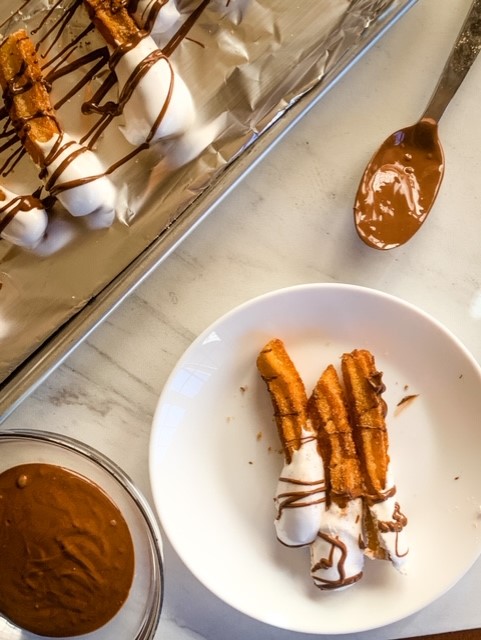 Can the churros be made ahead of time?

Churro dough may be made a day before and stored in an airtight container overnight. Fried and sugared churros are best served hot, but may be kept warm in an oven at 200 degrees for up to an hour.

I made my ooey gooey churro smores recipe early in the day, but kept in a warming tray until the neighborhood birthday party that was in the evening! They were perfect!

Tips and tricks for churro success!

How to and assembly of churro smores

Other hybrid you should try

Assemble of the churro smores