The leaves have almost all fallen and the weather has been a bit Bipolar here in Wisconsin. From 45 to 75 degrees all in 2 days, however, I was still in the mood to make a marbled pumpkin cheesecake with gingersnap crust.

A super creamy and smooth pumpkin cheesecake filling slathered on top of a crunchy and spiced gingersnap crust. Thanksgiving will be thanking me for this after dinner dessert. In addition, you will have to eat a slice of this even after a turkey and stuffing coma.

Second, with a food processor, pulse down the ginger snap cookies to a fine crumb mixture. Pour in a medium mixing bowl and add the melted butter, ginger, cinnamon, brown sugar and pinch of salt. Mix together until combined.

Third,  press the crumb mixture firmly in the bottom of the springform pan. Pre-bake crust for 10 minutes in oven. Remove and set aside.

First, mix the cream cheese and granulated sugar on medium speed until smooth and creamy. Add in the vanilla extract and sour cream and blend until completely combined.

Second, add in the eggs one at a time, mixing well after each addition. Once the last egg has been added and combined into the batter, stop mixing!

Lastly, remove roughly two cups of batter into another medium bowl (you should have two cheesecake batter bowls). Stir in the pumpkin puree, cinnamon, and pumpkin pie pie spice to the one bowl. Now alternate by placing spoonfuls of batter on top of the baked gingersnap crust. Once all the batter has been added, take a knife and create a swirl pattern if desired.

Pumpkin cheesecake with gingersnap crust can be frozen  for up to 3 months. Be sure to thaw in the refrigerator before serving. In addition, do not  freeze it with any toppings on it!

How do I know when my cheesecake is done?

The jiggle test will let you know what the cheesecake is done. When moved slightly the center will jiggle a little bit. 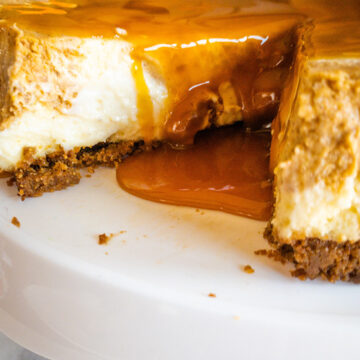 Fun fact of the day

Grapes light on fire in the microwave