It's so cold out that even polar bears are shivering! So what better time to make the new craze of puff pastry cinnamon pinwheels! They are warm, sweet, and the perfect comfort food for this winter!

Wisconsin has been hit hard in February with below zero temps and a shizzle ton of snow! I am just ready for my snot not to freeze when I go outside. And for the love of everything that is holy, NO MORE SHOVELING the white death! Okay, enough of me ranting, back to cinnamon pinwheels!

A light and crispy filled with warm brown sugar glaze and topped off with cream cheese frosting!

These pinwheels are just a shortcut for a cinnamon roll. Super easy to make and after I read an articles on how popular they were becoming, I said why not. Also, working with puff pastry is fun and super simple!

These cinnamon pinwheels are definitely less time consuming than homemade ones, so enjoy!

The great thing about these puff pastry cinnamon pinwheels is the variations for its recipe! 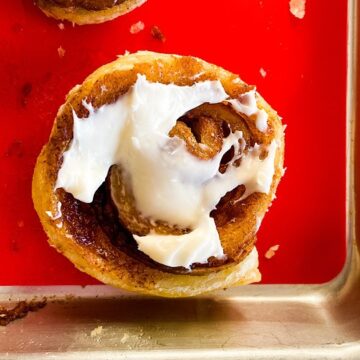