Guys and gals, I don't know about you, but I am getting pretty tired of 50 degree and windy days. I am ready for self induced sunburns and potlucks! So making this Oreo dirt cake without cream cheese was just the ticket to bring me out of my spring time funk!

A kids classic and no bake dessert that can be the hit of the potluck! Oreos, vanilla pudding, and more Oreos! Top it off with those Black Forest whimsical gummy worms and you will have kids flocking to the table this dessert is on!

This recipe takes me back to about the summer of 1986 at a summer potluck. One bite and I was hooked! You can't go wrong with creamy vanilla pudding and Oreo cookies. The gummy worms were just an added bonus. Little known fun fact about me is that I am a hard candy junkie. You can add just about any piece of hard candy to my desserts and I am on cloud nine!

I obtained a copy of this recipe somehow from my stack of cookbooks and I thought that I would introduce my kiddos to Oreo dirt cake! Nonetheless, we all had a blast making it and they had even more fun eating it!

Making an Oreo dirt cake is pretty simple. However, keeping it in the fridge is the longest part of this whole process. Please follow the steps below!

First, with a knife, roughly chop up about 12 Oreos and set them aside. You want to have them in chunks.

Second, with a food processor fitted with an S blade, add the rest of the Oreos. Pulse down until you get a fine cookie mixture (it will literally look like dirt) Set that aside in a bowl.

Third, in a large mixing bowl, add both boxes of instant vanilla pudding. Add the 3.5 cups of milk. With electric hand mixer, mix on low until mixture is well combined. Set in the fridge for at least 30.

Fourth, with an electric mixer, cream the room temperature butter until light and fluffy. Add this to the set pudding. With a spatula, fold in the cool whip until the mixture is uniform and no streaks are seen.

Now that the vanilla pudding and Oreo dirt mixture are made, it's time to layer them together!

So with each clay pot add a layer of the chopped Oreos, followed by the dirt mixture, and then vanilla pudding. Repeat this process until all clay pots are three quarters full with pudding and finish off with dirt on top and gummy worms.

Put each clay pot in the fridge to chill overnight. Serve the next day!

Oreo dirt cake can be made a couple of different ways. Below is what I used to make my recipe.

How do I store Oreo dirt cake?

Store with plastic wrap covering each clay pot in the fridge for up to 3 days.

Why is it called a dirt cake?

Simply because of the the messy, dirty look of the cake. 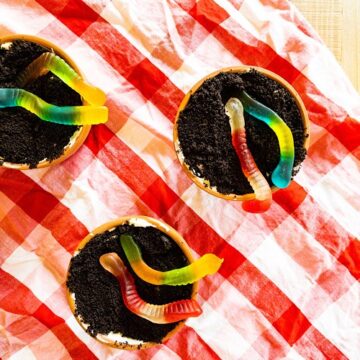 Assembly of the dirt cake

According to ABC news, the average chocolate bar has 8 insect legs in it! Yuck! See, that is why I prefer hard candy!