As I am sitting here on this dreary Monday, I was pondering what dessert was next up for my blog. And then it dawned on me after I saw an ad for banana pudding, how much I love it! So for my next creation, Magnolia bakery banana pudding with brownies!

Homemade sweet and creamy banana pudding layered on top of chocolate brownies and topped off with whipped cream and Nilla wafers. Sounds like the perfect dessert to celebrate the Easter Holiday with!

What is Magnolia Banana Pudding?

Magnolia Bakery is in New York and although it has a ton of bakery items, it is famous for its Banana pudding. They serve it in a cup with the traditional Nilla wafers and whipped cream. Another variation is with Oreo cookies and chocolate shavings.

Banana pudding can be put in a 9x13 cake pan or even made as a trifle. The options are endless on how you want to serve it!

How to make the pudding

First, in a large mixing bowl, beat the sweetened condensed milk and water until well combined (1 minute). Next, add the instant pudding mix and beat well (2 minutes). Cover and refrigerate for 4 hours or overnight. Minimum of 4 hours as you want the pudding to set.

Lastly, in a large mixing bowl, beat the heavy cream until stiff peaks form. Gently fold the whipped cream into the pudding mixture until no pudding streaks are left. Set aside until ready to assemble on the brownies.

In a large mixing bowl with an electric mixer, beat all the ingredients on medium for 2 minutes or until well combined. Pour batter into a 9x13 cake pan and bake for 25-30 minutes or until brownies are set. Let cool completely.

Assembly of the dessert

These are pretty easy to assemble and don't take a lot of time!

Once the brownies have cooled completely, layer the banana pudding on top. Next slice bananas on top and add extra whipped cream and Nilla wafers! Serve and be sure to enjoy!

How long does the banana pudding last?

It is best eaten right away, but will last up to 24 hours in the fridge. The brownies will last longer without the pudding on top. Cover them in an airtight container for up to 3-5 days at room temperature.

Can you freeze Magnolia banana pudding?

No, it doesn't freeze well due to the amount of water in it. 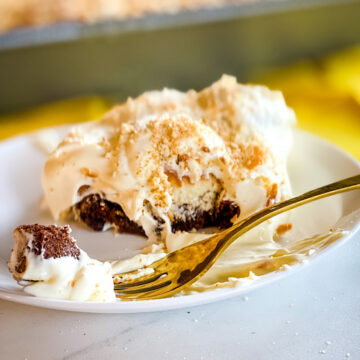 Assembly of the brownies

No two cornflakes look the same! Just in case you wanted to sleep better at night!