What's better than a hummingbird cake you ask? These hummingbird cannoli's! It is a simple fried cannoli stuffed with a sweet cream cheese that is filled with crushed pineapple and bananas. They are then dipped in white chocolate and pecan meal. Very easy to make and something that can be whipped up in a jiffy! Next to sliced bread, these new little desserts will definitely be served during the Easter Season.

Other desserts that you should consider making are my brownie donuts with bailey's glaze, raspberry banana cruffins or cookies and cream mini pavlovas. They all didn't last long in my kitchen and will be guaranteed to not last long in yours either! 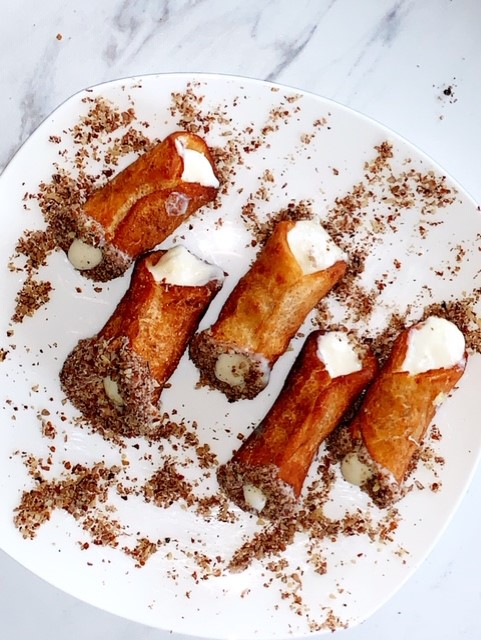 History of a cannoli

This little fried delicacy is a Sicilian dessert  They are served during Carnevale season, possibly as a fertility symbol (damn I would have eaten a million of these bad boys when we were trying to get preggers with my second kiddo).

Many variations have been used to make the cannoli over the years. Typically, they are stuffed with a ricotta cheese mixture, but marscapone has also been used. Additives such as pistachios, almonds, chocolate chips and orange peel, and pumpkin have been used. Well.... I thought way out of the box when I made mine!

As far as I can remember, I have always wanted to take a stab at making cannoli's. My first time was a success and they turned out delicious! I am slowly coming into my niche of making the hybrid dessert and thinking outside of the box. That is what I did with this dessert.

A hummingbird cake is a spiced cake that has the bananas and crushed pineapple within it. It is frosted with a cream cheese frosting and then sprinkled with the nut of your choice. It is sweet and definitely can be served at any celebration.

I made the traditional fried cannoli and then came up with my own filling. Ricotta cheese is not at the top of my list, so I used cream cheese instead. White chocolate was used along with the pecan meal as I had an overabundance of these in my baking pantry! 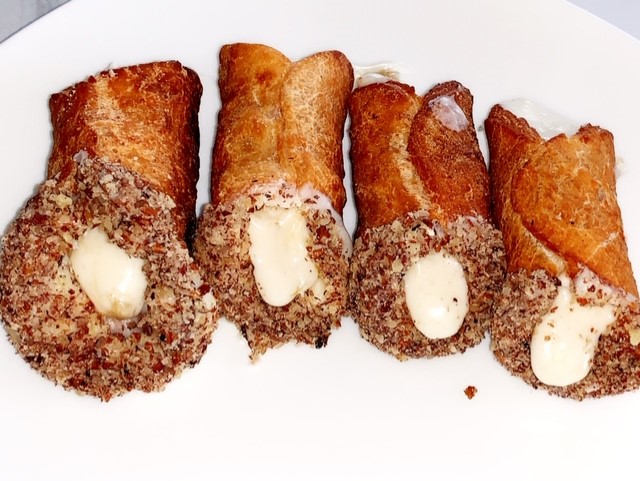 How to make the cannoli shells from scratch

Making the shells from scratch was surprisingly very easy. In a food processor, you combine the flour, salt, sugar and cinnamon. Add in your chilled butter and pulse until your mixture resembles small pebbles.

Add in the egg and your cold marsala wine (I used white grape juice as I knew the kids would drink the rest). Pulse until the mixture barely holds together. Transfer the dough to a lightly floured surface and knead until the dough is smooth (5 minutes). Wrap dough is plastic and put in the fridge for an hour.

Once removed from the refrigerator, put dough on a lightly floured surface. Using a rolling pin, roll out until the dough is about ⅛ inch thick. Using a 4 in round cookie cutter, cut out your ovals. Repeat process until you have 12 ovals (I got about 14).

Heat vegetable shortening in a deep saucepan until it reaches 350 degrees (I used a candy thermometer). Place egg white in a small bowl and set aside. Line a plate with a paper towel.

So I am not going to lie, when I got to the part of having to wrap the dough around the dowel, I said quite a few expletives as I realized I didn't have any. So I researched how your can make your own dowels at home out of aluminum foil. Yup, you heard that right! Please see link here on DIY cannoli dowels. It actually worked great and I didn't need to spend any extra cash! A win win situation!

Wrap one oval of the dough loosely lengthwise around the dowel. Brush one end of the dough with egg white, then pull the dry end over the top and press down to seal. Repeat with other ovals.

Using tongs, carefully lower the dough into the oil and fry until golden brown, turning them as they fry (1-2 minutes). Remove the shells with the tongs and transfer to the paper towel lined plate to cool.

When the shells are cool enough to touch, remove the molds and repeat with the remaining dough in batches until all the shells have been fried.

Melt your Ghirardelli white chocolate chips in the microwave and put pecan meal in a bowl. Dip ends of cooled cannoli's in the white chocolate and pecan meal. Set them on a baking sheet lined with parchment paper. Put in fridge until the chocolate has hardened.

In a large mixing bowl, beat your cream cheese and softened butter until smooth and creamy. Add in your confectioner's sugar, Lorann's Vanilla bean paste and milk until all blended well. Fold in your crushed pineapple and bananas.

Cut a hole in a plastic bag or piping bag and place filling in. Pipe filling inside the cannoli's from the non-dipped side. Serve and Enjoy! 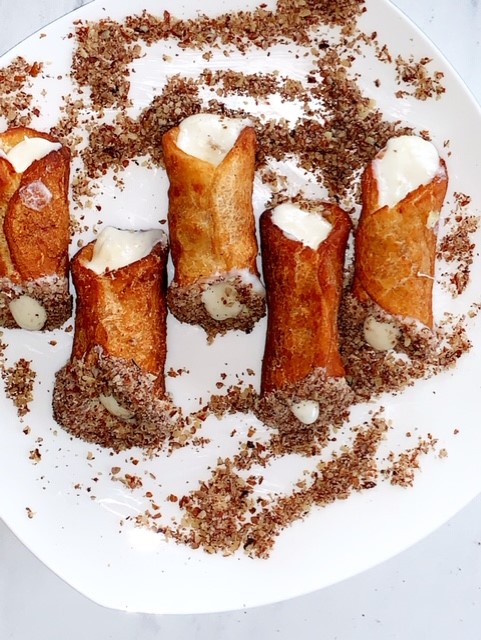 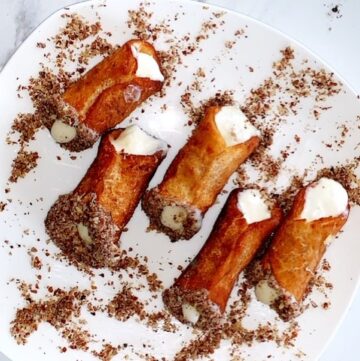 Bees sometimes sting other bees! Wow! What bastards, even though we need them for our entire existence on this planet to survive!