Fall is almost here and the balmy days are soon upon us!  Sweater weather, leaves changing, and apple picking season are among my favorite things. However, the most amazing taste during these months are the fresh donuts from the apple orchard.

That is why I wanted to recreate much healthier version in my Healthy Cinnamon donuts. They have way less calories and I doctored them up to taste just as amazing! A baked cinnamon donut dipped in a maple glazed and topped off with fresh chopped Granny smith apples. They are so delicious that I may give the Elegant farmer a run for its money this fall!

What makes these cinnamon baked donuts so healthy?

These guilt free baked cinnamon donuts are a great alternative to the no so healthy fried ones at the apple orchard. The ingredients in here are found in most local grocery stores and may already be in your pantry at home.

Second, in a large mixing bowl, whisk the oil and eggs. Add in the flour, cinnamon, milk, baking powder and salt and mix with electric mixer until well combined.

Third, spoon batter into donut cavities until ¾ full. Bake for 10-12 minutes or until toothpick inserted comes out clean. Cool completely and transfer to wire rack.

Lastly, add the ingredients to a large saucepan for the maple glaze. Dip each cooled donut into the glaze and top with apples. Serve and enjoy!

Yes, my recipe is for sure. They are fried in oil which adds extra calories and fat. 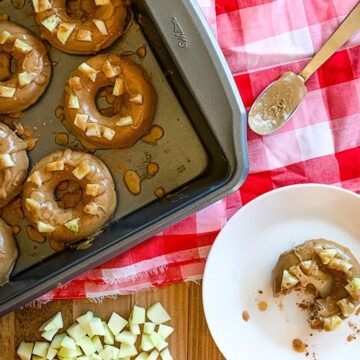 Fall colors are caused by the amount of sugar in the leaves! Cool!