With Thanksgiving fast approaching, I give you easy pumpkin pie crisp! It is a great alternative to the classic pumpkin pie. Nonetheless, it is delicious and super easy to make.

A sweet and creamy pumpkin pie filling topped with a crunchy streusel and then baked to perfection. Serve it with right out of the oven with vanilla ice cream and whipped cream.

I have admitted to you all that I am not a huge lover of anything pumpkin. However, I do love anything with crisp on the end, so that is why I gave this recipe a try. This dessert will replace the classic pumpkin pie at our Thanksgiving and I am excited to have my family try it.

Since I am the designated dessert maker every year, I bring as many non-traditional desserts to our gatherings. On occasion, I do get push back, however after mentioning this easy and delicious pumpkin crisp, everyone was all on board!

What is a crisp made out of?

A crisp is an American dessert usually consisting of a type of fruit baked with a crispy topping. The topping, or streusel, is made out of butter, oats, flour, brown sugar, and spices such as cinnamon or nutmeg.

Many new bakers out there may not realize the difference between pumpkin puree and pumpkin pie filling, but there is!

Pumpkin puree is a cooked pumpkin that is smashed or blended in a food processor to create a small pulp. It contains no spices or added sweeteners. When making homemade pumpkin pie filling it is better to use canned pumpkin so you can add your own spices and sweeten it to your own taste.

Pumpkin pie filling is a puree that has already been flavored with the spices and sweetened. It is convenient for a quick pumpkin dip.

How to make easy pumpkin crisp

This pumpkin pie crisp is so easy to make. It only takes about 20 minutes to prep and  between 40-45 minutes to bake.

Can this be made ahead of time?

Yes, it can be made ahead of time. However, I recommend baking it fresh when you are ready to serve it.
Follow all of the steps up until baking. Cover with plastic wrap and place in fridge until ready to bake. Let it sit at room temperature while pre heating the oven. Bake as instructed.

Should pumpkin crisp be refrigerated?

Yes, once it has cooled down, cover and place in fridge. Eat within 2 days as the streusel topping will lose its crunch. 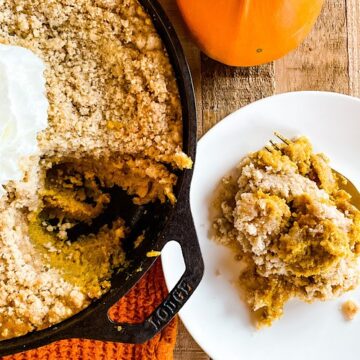 The most expensive pizza in the world costs 12,000 dollars. WTF?