A festive blue cinnamon roll filled with an Oreo sugar filling and topped with icing, extra Oreos, and chocolate chip cookies. These cinnamon rolls have gone viral on Tiktok and making them was so much fun!

Please check out my other favorite Tik tok recipes which include cookie monster cookies, Tanghulu, and whipped coffee honey donuts.

Why are these cinnamon rolls so amazing?

First, make the yeasted dough. Combine the instant yeast, granulated sugar, and milk in a mixing bowl. Let it sit for about 5 minutes to proof.

After the 5 minutes is up, add in the eggs and melted butter until completely incorporated. Add in one cup of flour at a time.

Once add the flour is mixed in, add in the blue food coloring. Cover the dough and put in a warm place and allow it to rise for an hour.

Punch dough down. Spread and roll the dough out into a rectangle (doesn't need to be perfect in shape). Add a layer of softened butter to the dough. Spread the Oreo mixture on top of butter.

Roll the dough out lengthwise and cut rolls out with a sharp knife or with unflavored dental floss. The rolls should be about 1.5 inches thick.

Add cinnamon rolls to dish, cover with plastic wrap, and let rise for another 1 hour. Bake for 20 minutes.

Making icing by mixing cream cheese, confectioner's sugar, and unsalted butter. Spread on top of the rolls along with chocolate chip pieces or more Oreos. Serve and enjoy!

How do I store these cinnamon rolls?

In an airtight container in the fridge for up to 5 days.

Can I use puff pastry to make these cinnamon rolls?

Yes, you can. Just know that bake time will vary and color may be different. 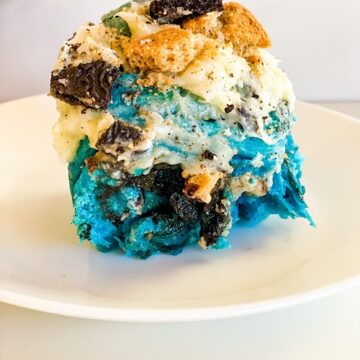 For the cinnamon rolls

Use a hair dryer to crayon marks off the wall! Hmmm....who knew!