Any Horchata lovers out there? I prefer it from Sol De Mexico, one of our local Mexican restaurants here in Muk town. There is just something about the sweet cinnamon flavor that is super refreshing. So it was time I added it to my divine horchata cupcakes with horchata buttercream frosting.

A super moist cinnamon horchata infused cupcake frosted with a horchata flavored buttercream. Each bite will make you think you are actually drinking the creamy spiced rice milk. These cupcakes are simple, dreamy, and take no time at all!

Making these cupcakes come to life has been awhile in the making. So this past weekend when we ordered take out from Sol, I ordered some Horchata and thought I NEED to add this to a dessert blog. This creamy spiced rice drink has such a wonderful flavor that it would be an injustice if I didn't add it in any of my desserts. So enjoy!

Why you will love these cupcakes!

Preheat oven to 350 degrees F. Line a standard cupcake tin with liners and set aside.

In a medium mixing bowl, whisk together the all-purpose flour, baking soda and powder, salt and ground cinnamon. Set aside.

In another large mixing bowl and with a hand mixer on medium, cream together the butter until light and fluffy. Add in the granulated sugar and mix until completely combined.

Beat in egg whites and blend until mixture becomes very fluffy. Add in the vanilla and sour cream and mix until completely incorporated. Pour in dry ingredients and mix until just combined. Don't over mix.

Add in horchata and slowly mix to combine. Add batter to cupcakes liners and fill until ¾ full. Bake for 15-17 minutes or until toothpick inserted into the center comes out clean. Cool completely before frosting.

In a stand mixer fitted with a paddle attachment, cream the unsalted butter until light and fluffy. Add in the confectioner's sugar slowly, vanilla extract, cinnamon, and horchata. Mix until desired consistency has been reached. Pipe cooled cupcakes and sprinkle with additional cinnamon.

How do I store these cupcakes?

You store frosted cupcakes in an airtight container at room temperature for 3-5 days. 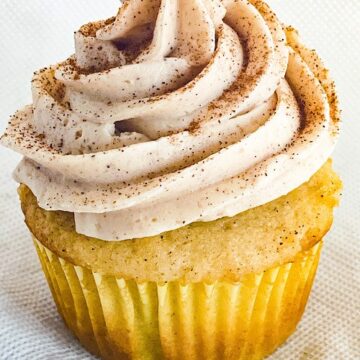 Cotton candy was invented by a dentist in 1897.