Coo coo for cocoa puffs, how about go nuts for these Cronuts with lemon glaze! Ok, I admit that was pretty cheesy, but these amazing little circular delights are to die for! I love anything that is a hybrid as it is super fun to make. So you get the shape of a donut with the flaky layers of a croissant!

I saturated them with lemon glaze since it is supposedly citrus season. Nonetheless, it was a great addition and these were gone in 1 day in my house. Nom Nom nom!

Another one of my nom nom nom desserts are my apple pie crisp bars  The flavor of apple and cinnamon topped with crunchy granola gets me really going in the morning! 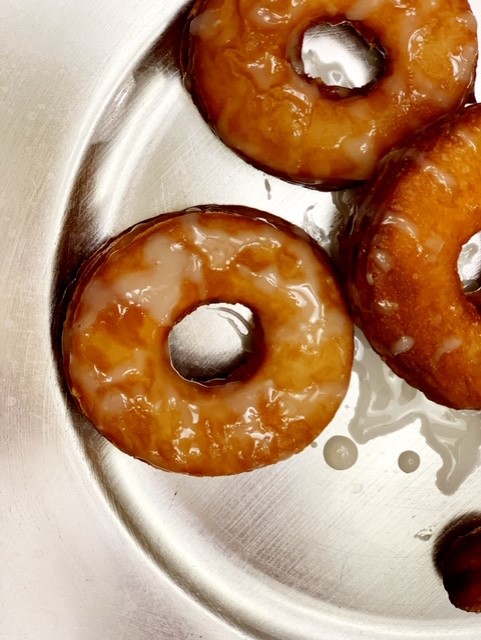 I heard about these cronuts years ago and was scared to try them because I didn't want to start a grease fire in my kitchen, but I am sure glad I took the challenge. Chef John from food wishes has the best recipe and it is the one that I followed in my recipe.

It was a lengthy process and with all my experimenting in the kitchen lately, I have found I REALLY enjoy trying to master the difficult recipes. The lemon glaze was a great addition doing and it complimented the cronuts well! 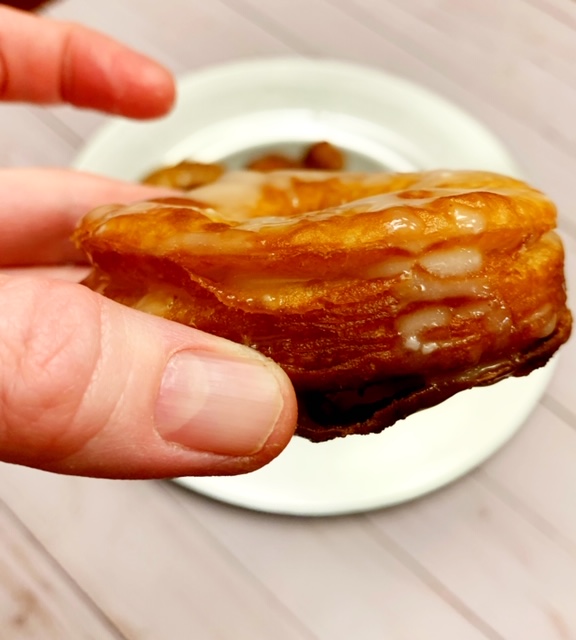 Making the cronut dough and chilling

First, add dry active yeast and warm water in mixing bowl. Make sure the water is not too hot as it will kill off the yeast. You should have foamy water.  After 5 minutes, stir in sugar, milk, melted butter, vanilla extract, egg and ground cinnamon (you can use nutmeg as well). Whisk thoroughly. Pour flour on top. Place the mixing bowl into the mixer.

Second, attach your dough hook and mix on low for about 3 minutes. Dough will be soft and sticky. Transfer to a floured surface and knead 2-3 times more. Shape into a ball and wrap in plastic wrap. Put into the fridge for 20 minutes to let the gluten relax.

This next part is important. Third, unwrap dough and put on a lightly floured surface. Roll out into a large rectangle (9x18) and about ¼ in thick. Nature likes circles much better so you have to work at it to get it as close to a rectangle as possible.

Fifth, transfer dough to a sheet pan. Cover with plastic wrap and a damp towel. Put in fridge for 20-30 minutes again.

Sixth, repeat the same step as above (except no buttering of dough). Make dough rectangle about 8x14 this time. Put back in fridge for 2 hours.

Seventh, roll out dough to about ⅜ in thick. Next, cut dough in half and put other in fridge. Use a sharp 3 in circular cutter to cut circles of dough from piece on the work surface. I recommend the scrapcooking stainless steel donut and cronut cutter. It works great!

Lastly, put cronuts and holes on a baking sheet lined with parchment paper. Set in unheated over for an hour to let them rise for an hour.

Frying the cronuts and lemon glaze

While your oil is heating up in your fryer or deep sauce pan, you can make your glaze. Y Mix confectioner's sugar, milk, vanilla and lemon juice. Set that aside.

Once oil is ready (350 degreesF), you drop in 2 cronuts. Fry them for 1-2 minutes on each side. Take them out and place on a paper towel on a cooling rack. Once completely cooled you can drizzle glaze on or dip tops of them into glaze. Let glaze set for about 15 minutes before eating!!! 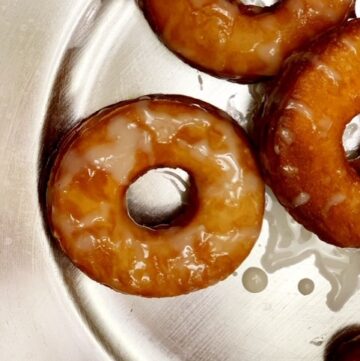 Chef John
This is a cronut, which is a hybrid between a donut and croissant. It is buttery and covered in a sweet lemon glaze.
Print Recipe Pin Recipe
Prep Time 1 hr
Ready in 5 hours and 5 m 4 hrs 5 mins
Total Time 5 hrs 5 mins
Course Kitchen
Cuisine American
Servings 15 people
Calories 318 kcal

How to fry and glaze cronuts

Fun fact of the Day!

Just in case you were wondering, horses and rats can't vomit. So I now hope you can sleep better at night just knowing that!