He did the Mash, the Monster Mash, it was a graveyard smash! The Creepy Monster mash whoopi pies may not be part of cheesy song lyrics, but they are a great Halloween snack!

Moist and colorful cakes sandwiched between whipped buttercream frosting and then decorated with the crazy monster candy eyes! I had a lot of fun making these whoopi pies and can't wait to hand them out to the neighborhood kiddos later! My eldest gave me his approval yesterday.

First, preheat the oven to 400 degrees. Line the baking sheets with parchment paper.

Second, mix the cake batter according to the directions on the box. Divide batter between 4 bowls. Mix in the four different food colors  and spoon batter onto baking sheets. Bake for 7-8 minutes or until tooth pick comes out clean. Let whoopi pies cool completely before frosting.

Third, while the whoopi pies are baking make your whipped buttercream frosting. In a stand mixer fitted with a paddle attachment, beat the butter on medium until smooth and creamy. Slowly, add in the confectioner's sugar until combined. Mix in the vanilla extract and heavy cream. Beat for an additional 3-4 minutes until desired consistency has been reached.

Lastly, assemble the whoopi pies. Spread the buttercream between two cakes. Add the eyes on top however you want! Serve and enjoy! See video below on how to assemble these creepy little monsters!

What baking equipment do I need?

This recipe is pretty easy to make and super kid friendly.

What is another name for a whoopi pie?

A couple of other names are "moon pies" or a big fat Oreo.

How do I store these whoopi pies?

They are best store in an airtight container in the fridge and will last up to 10 days. 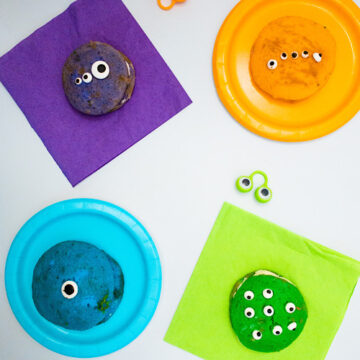 Assembly of the monsters

Trick or Treating has existed since medieval times!