Ya'll remember that nostalgic Little Debbie brownie with the rainbow sprinkles that was packed in your lunch box as a kid? The one that kids would ask you to trade for? Well, I made my own homemade Cosmic Brownies today and it blows Little Debbie's out of the water!

A chocolate, rich, and chewy brownie all topped with fudge like frosting and rainbow confetti sprinkles. Man, I wished I was in kindergarten grade all over again!

Nonetheless, at least my kindergartener can take it in her lunch. And in her words, "Mom, you make the best desserts, and you are the best mom ever".  I don't know about that kiddo, and some days I feel like I am failing, but just for today I will take it and enjoy my homemade version of a Little Debbie's classic.

Most of these ingredients will be found in your pantry except for maybe the sprinkles! Now worries, they are not expensive to make!

How to make these brownies

These Cosmic brownies are simple to make. Follow these several steps and you will have the perfect brownies.

Second, mix wet ingredients together until smooth and pale.

Lastly, mix up ingredients for frosting and spread evenly on brownies. Sprinkle on rainbow confetti and refrigerate for 1-2 hours. Cut and serve!

What makes cosmic brownies so special?

Cosmic brownies are rich and decadent and will make a great brownie recipe without the jimmies on top. Other brownie recipes that are just as good are my easy chocolate caramel brownies and Oreo cookies brownies.

Why is it called a cosmic brownie?

These brownies were created because of a cosmic bowling trend in September 1999. 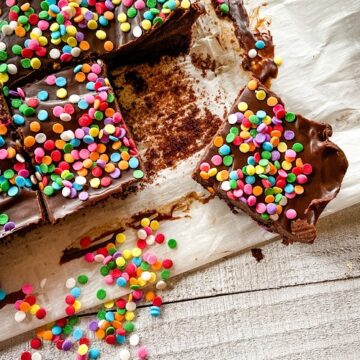 Brownies and Bars oh my!

Little Debbie is actually a real person and is CEO of Mckee foods.