It's almost the start of the summer weekend and the weather today was perfect for making homemade cinnamon sugar cake donuts. By weather, I mean 45 and cold as hell! Not the greatest, but what Memorial Day weekend is ever nice? So comfort food for breakfast was just the ticket.

These donuts are baked, super moist, and very easy to make. Sweet and with a cinnamon sugar coating makes them outstanding. Not exactly the most healthy, but who's counting calories this weekend?

I have only ever had the fried version of these donuts from an apple orchard, so making the baked version was easier, less messy, and to be honest tasted just as good!

First, preheat the oven to 350 degrees. Grease the standard donut pan with non-stick spray and set aside until ready.

Second, in a medium sized mixing bowl, add the flour, brown sugar, salt, baking soda, and and whisk together. In another large mixing bowl, mix together the egg, sour cream, oil, milk, and vanilla extract.

Third, add the dry ingredients to the wet ingredients and mix on low until just combined. Transfer the batter to the piping bag fitted with 1 inch tip and pipe batter into donut pan. Melt butter and add to a bowl with the cinnamon and sugar. Mix together and set aside.

Lastly, bake for 10 minutes until donuts are set and slightly golden brown in color around the bottom edges. Cool in pan for 5 minutes and then remove and dip tops (other parts of donut as well) in cinnamon sugar mixture. Serve and enjoy!

This recipe is very simple and doesn't require a lot of baking supplies. However, I do recommend these supplies to make the perfect round donut every time!

What makes these Cinnamon and Sugar cake Donuts so amazing?

What if I don't have a donut pan?

You can use a mini muffin pan and some aluminum foil to create a donut mold. Bake for 18-20 minutes.

What is the ratio for cinnamon to sugar to make the mixture? 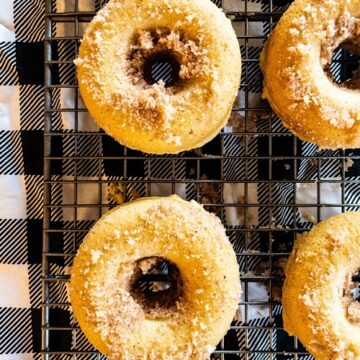 Rats and horses can't vomit. Just in case you were wondering and can't sleep at night over this!