Who doesn't love warm apple pie (ok I just thought of the scene from American pie) and fresh cinnamon rolls? My heart is singing with this one and I am sure Jason Biggs would appreciate these as well!

Homemade brioche type dough, layered with brown sugar cinnamon filling and fresh apple pie filling. In addition, once you pull them out of the oven, cream cheese frosting gets piled on top! My salivary glands are working overtime right now!

My kids have been bugging me for a new kind of breakfast food for about a month now. Nonetheless, I had to get creative in the kitchen. They all love cinnamon rolls and the last batch I made they were gone in 2 days. However, adding the apple pie filling was a hit (not just for them, for my son's friend as well).

These rolls are super filling and a great way to make their tummies full for school. Thank God, I don't have to count calories for my kids as they are all thin because these are anything but healthy for you! But is anything that tastes this good ever healthy for you?

Can the rolls be made ahead of time?

These cinnamon rolls with apple filling can be prepared a day ahead of time.  Nevertheless, with the holidays coming up, these rolls will make the perfect breakfast for family coming to visit. Please see the steps that can be made the day before and will lessen the time from the oven to your mouth!

How to make cinnamon rolls with apple filling

These cinnamon rolls are worth the hard work! Do yourself a favor and make them for your next get together with family!

First, prepare your dough. If making the same day give yourself at least 3 hours from start to finish.

Second, make the apple filling. Place in the fridge to chill until ready for use.

Third, assemble the rolls. Chill in freezer for at least 30 minutes before cutting and placing in pan.

Fourth, bake the rolls. While the rolls are baking, prepare cream cheese frosting. Once they have cooled for 15 minutes, frost! Enjoy!

Can I use puff pastry or flaky biscuits in this recipe?

Yes, to both. If you are not in the mood to make the dough from scratch feel free to substitute.

Can I use store bought apple pie filling?

Yes, you can and it will cut down on time if making the dough from scratch.

How do I store these cinnamon rolls?

Cover the rolls and store at room temperature for 3 days and up to 5 days in the fridge. 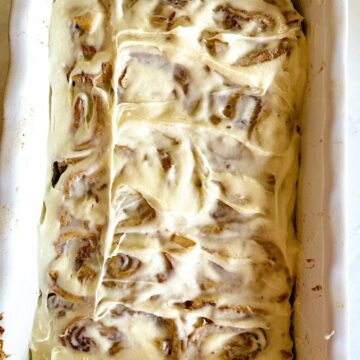 Breakfast at its best!

Phobophobia is the fear of having phobias! I can't even say the word!