Eat your heart out Cinnabon lovers, this Big Cinnamon Roll Cake, takes the cake, literally! It is topped with a sweet caramel vanilla glaze and is the best breakfast and dessert all in one. Best served with a cup of hot coffee, or in my case iced coffee!

My buttermilk coffee cake with cinnamon topping is another morning dessert, but really can be eaten any time of the day. It is super rich and buttery, just how I love my breakfast, or I mean desserts. 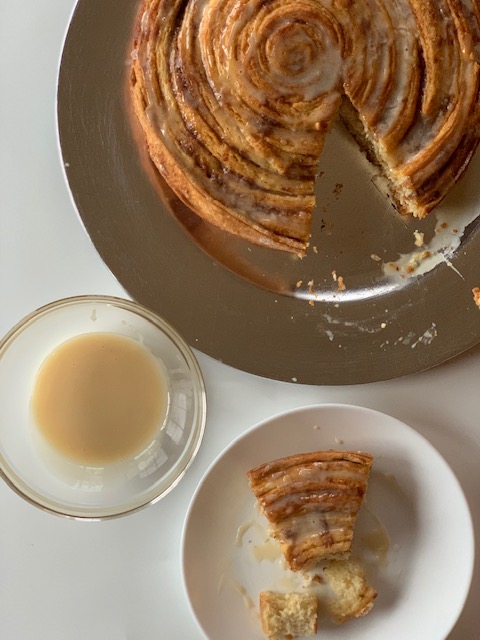 So the inspiration for making this big beast of a cinnamon roll came from my recent trip to Cinnabon at the mall. I always buy my kids one as they love cinnamon rolls as much as I do. So why not take my own cinnamon roll recipe and experiment with it.

Norah and I put the cinnamon filling paste on the dough and cut into strips. She really enjoyed wrapping the dough around in circles and was even sneaking bites to herself and Ruby. Pretty sure the dog at more raw dough that she should have, but hell she is a lab. They have a stomach of steel, right? 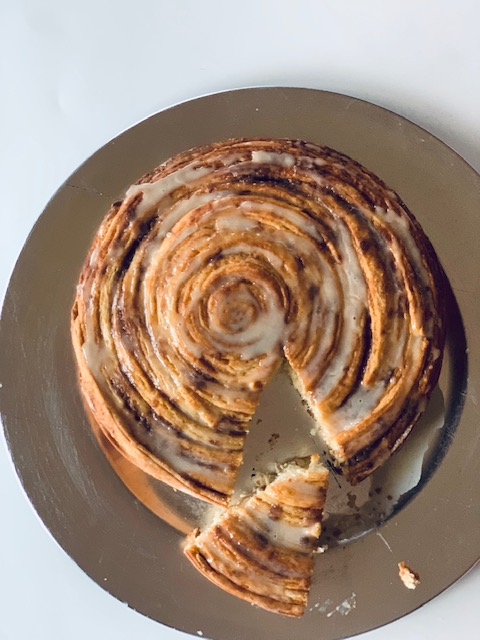 This recipe does have several steps, but you cut out some time when you make the big cinnamon roll instead of several little ones.

In a large mixing bowl, you combine 2 ¼ cup of all-purpose flour and active dry yeast. I use the Kroger's brand as I have had the best luck with it. Whisk and set aside.

In a small sauce pan, heat and stir milk, salted butter, granulated sugar, just until warm and butter almost melts. Then add the flour mixture and 3 eggs. Beat with electric mixer for 30 seconds scraping the bowl. Beat for another 3 minutes and stir in remaining 1 ¾ cup of flour.

Turn dough out onto a lightly floured surface. Knead enough to make a moderately soft dough that is smooth and elastic (3-5 minutes total). Shape the dough into a ball and place in a greased mixing bowl. Cover and let sit in a warm, undrafted place. I always use the oven for this. Let sit for about an hour to rise.

Punch dough down  and turn out onto a lightly floured surface. Cut in half, cover and let rest for 10 minutes. Other half I placed in the freezer. Grease a 9 inch pie pan.

Roll out the dough so it becomes a 12x8 rectangle. Spread filling on dough. Using a pizza cutter, slice into 9 strips 1.5 inches wide. Take one strip and roll up loosely and put in the center of the pie plate. Wrap around the other strips around the center roll. One strip should start where the other one ends. After done, cover and let sit for 60-90 minutes to let it rise again. You will notice that some of the strips will rise higher than the other ones, just use a spatula or back end of the spoon to pat on them.

Once it is done rising, you can bake at 375 for about 25 minutes. Oven temps will vary, so just make sure it is golden brown on top. Let cool for about 10 minutes. 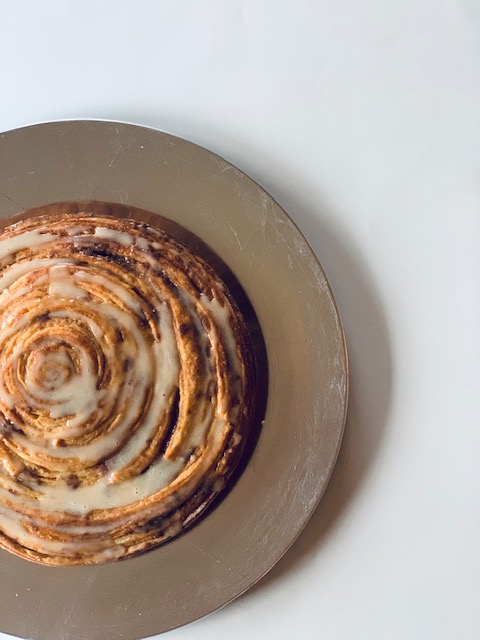 This is a really simple step, but can be varied. I created more of a paste for this recipe. You combine the brown sugar, flour and melted butter. Other recipes will say to cut your butter in with the brown sugar and cinnamon, but I chose this method as it was easier when making the large cinnamon roll and mixture didn't fall out.

The glaze is really easy to make and a great addition to the cinnamon roll. You combine the confectioner's sugar, light corn syrup, vanilla extract, Hershey's caramel syrup, milk or half and half. To get your desired consistency, feel free to add more milk or half and half as needed. 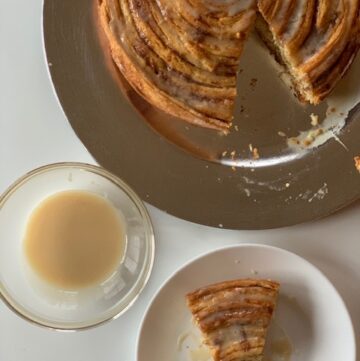 For all you Sesame Street lovers out there, Cookie monster has a name. It's Sid!