You want to know what is better than a fried apple fritter from your local bakery? A baked apple fritter made in the comfort of your own home! In addition, they are super easy, delicious, and have already disappeared from my glad ware container that was sitting on my counter (darn kiddos).

A baked fritter made with canned original flaky biscuits, tart apples and a cinnamon glaze. They pull apart so easily and they can be popped in your mouth on the go in the morning or even for an afternoon snack! They are essentially made in the same way as my snickerdoodle monkey bread!

Making apple desserts has really been on my radar lately and truth be told, I love them! There is just something about a tart apple being baked into a dessert that screams, "the leaves are changing and I soon get to have a fire in the fireplace".

However, this dessert was fun to make with my three year old Jacob. It is a super kid friendly dessert and we did it together. I was listening to country radio and he was focused on Mickey and the Roadster racers, but we managed to roll the dough balls, cut apples, and slap them on the parchment paper for baking. He even helped mix the cinnamon glaze (some on the counter).

This recipe for baked apple fritters is not costly at all and can all be made with a few simple ingredients!

What are the best apples for baking?

For this baked apple fritter recipe, I preferred to use a Granny Smith apple. Other apples that I have used in the past are Pink lady, Honey crisp, and Cortland.

The best apples for baking are ones that are tart and hold up and don't become a mushy mess when baked. In addition, the tartness of the apple compliments the sweetness of the dessert. A match made in heaven!

Tips on how to make the best baked fritters!

How to make baked apple fritters

First, preheat the oven to 350 degrees. Prepare the baking sheet with parchment paper. Set aside. Peel, core, and slice apples and place into a bowl until ready for use.

Second, but biscuit dough up into little balls. Put in large mixing bowl with cinnamon and sugar and mix until the dough is all covered. Fold in the chopped apples.

Third, using a cookie scoop or your hands, press together the fritter to make it roughly three inches tall. Melt butter in microwave and drizzle over fritters. Make glaze.

Lastly, bake for 18-20 minutes or until fritters are a golden brown color. Once the fritters have cooled off, drizzle cinnamon glaze on top and enjoy!

What is a fritter in baking?

Typically, these are deep fried cakes of chou pastry or yeast dough. However, they can be baked as well.

Just remember just because they have fruit in them doesn't make them healthy. However, the baked version have much less calories versus fried. 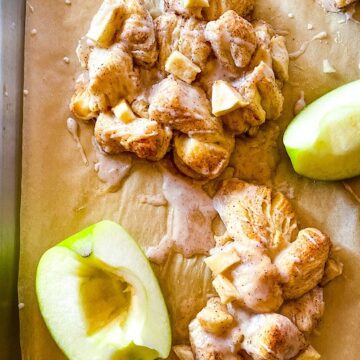 Did you know that Pez candy even comes in coffee flavor?