With Valentine's Day right around the corner, I just thought that I would gift you guys with one of my favorite cupcake recipes! Amazing red velvet cream filled cupcakes are to die for! Literally!

A moist and fluffy red velvet cupcake filled with a creamy chocolate filling and frosted with a sweet cream cheese frosting. Your sweetheart will sure love you after this treat!

I really can't say enough good things about these red velvet cream filled cupcakes. As aforementioned in a post awhile ago, my hubby does not possess a sweet tooth at all. However, he has requested for me to make him these cupcakes. He will only eat Red velvet desserts or anything with key lime in it.

These red velvet cupcakes are a traditional recipe and are super moist. In the center is a homemade fluffy chocolate buttercream and then frosted with my cream cheese frosting. Make these for Valentine's Day or just because. Either way no one will be disappointed!

You will need a few ingredients for this recipe, but most can be found in your fridge or pantry.

Varieties of cream filling to use

There are several fillings that can be added to these red velvet cupcakes. I chose a chocolate buttercream filling, but these other fillings would taste just as great!

What is the best way to fill a cupcake?

There are a couple of ways you can fill a cupcake. I chose to use a paring knife to cut out the centers of each of my cupcakes before filling. See video below on how to use a knife.

These cupcakes can be made relatively quickly and if you have any little bakers in the house like I do, by all means let them help you!

Can you fill a cupcake before baking?

Yes, you can. First, add the batter to cupcake liner, place jam, chocolate chips, or other fillings on top of batter and then add more batter to cover filling. Bake as directed! 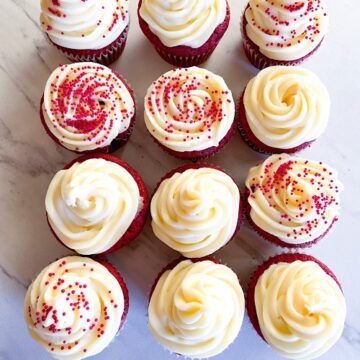 For the red velvet cupcakes

Assembly of the cupcakes

Red velvet cake was not originally made with food coloring!